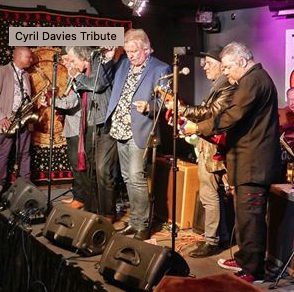 2022 marks 60 years since the musical revolution that defined British Rock and spread further at The Crawdaddy Club with resident bands like The Rolling Stones. As part of a series of Rock’s Diamond Year events organised by Robert Hokum, founder of Ealing Blues Festival, The Crawdaddy Club will be taking our local area’s rich music heritage into the future by celebrating local talented young bands ages 9-18 from Powerjam, the not-for-profit band project.

This “New Generation”, who have collectively achieved over 250K streams of their single releases since 2020 through Powerjam recordings (a label that allows its young musicians to retain full copyrights to the songs), will be performing alongside veterans who were deeply involved in the area’s global influence on popular music in the Sixties: Paul Stewart (original member of “The Others”, the third Crawdaddy house band following The Rolling Stones and the Yardbirds) & Tim Staffell (original member of the legendary band Smile, later known as ‘Queen’ who introduced Freddie Mercury to the band to take his place).

Powerjam Bands performing this night are : Late In Tokyo, Maschina, Minor Revelation, Nobody For President, Elastic Parade, and Bunch of Noise.

Whilst the West London Blues musicians of 1962 tended to be male, two female singers from Ealing were already becoming household names. Dusty Springfield would release her first solo single, ‘I only want to be with you’ in 1962. American museums acknowledge her role in championing the music of Tamla Motown. Cleo Laine was already gaining attention as an actor and jazz singer by 1962 performing with the Johnny Dankworth Orchestra. She would subsequently be regarded as the foremost jazz singer born in Britain. In later decades, Kirsty MacColl would become an Ealing resident while establishing herself as one of the most appreciated talents from the UK music scene.

The book Rock’s Diamond Year celebrates Rock’s 60th Birthday, from the formation of the Rolling Stones and the heyday of the British Invasion to the spawning of the Reading Festival, it explores the music history of the London clubs that were the engine rooms for British rock n roll.

The Rolling Stones, the Who, The Faces, The Yardbirds, Cream and the Bluesbreakers are amongst the many acts who performed on the London club circuit at venues such as The Ealing Club, The Crawdaddy Club, The Ricky Tick, The Half Moon, The Bull’s Head, The Marquee, The 100 Club, and the infamous Eel Pie Island Hotel. We revisit the days when Eric Clapton was God and Rock ruled the world. Play it Loud!

The event also features guest speakers. Richard Mills author of ‘The Beatles and Fandom, Sex Death and Progressive Nostalgia’. Who will talk about how ‘Rock’s Diamond Year’ is also relevant to the career of The Beatles. Doug Melbourne author of ‘How Much Do We Get for This Gig Anyway?’ will talk about the trials and tribulations of running a tribute band in this day and age.

There will also be live acoustic music between the sessions.

3.00pm – Ralph Brookfield talks to Alistair Young & Robert Hokum from the Ealing Club Community Interest Company who initiated Rock’s Diamond Year about the importance of 1962, the heritage projects they have been involved with and the Rock’s Diamond Year book.

5.00pm – Karena K talks to Doug Melbourne, Musician and author of How much do we get for this gig anyway? about the trials and tribulations of being a gigging musician and running a tribute band.

This newly refurbished premises, sat by the Thames is hosting live music! This Wednesday Geoff Garbow and Robert Hokum bring “Goodtime, up-tempo, foot tapping’ blues with ‘acoustic’ style performances for all to enjoy.