On the evening of 7 April 1962 Mick Jagger and Keith Richards visited the Ealing Club to see Blues Incorporated for the first time.

The famous 17 October 1961 meeting on a Dartford railway station platform and an ensuing conversation regarding blues records brought the future songwriting partnership together in search of better music.

By March 1962, just like many other blues record collectors, they had already seen the ads in Jazz News and New Musical Express for a rhythm and blues club in the London suburb of Ealing. 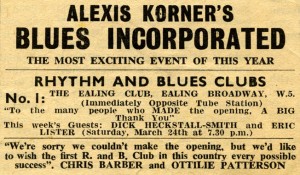 Brian Jones, from Cheltenham, had been attending the venue with Dick Hattrell in the weeks following the opening night on the 17 March 1962. According to Bill Wyman’s book, Brian Jones sat in with Blues Inc on two successive Saturdays. On 31 May 1962, Blues Inc had also recruited a new bassist, Jack Bruce (later of Graham Bond Organisation and Cream) with Long John Baldry joining Cyril Davies on vocals.

Sometime during the evening of the 7th April 1962, Jones was presented to the Ealing Club crowd by Alexis Korner. With his Hofner Committee guitar, Jones as “Elmo Lewis” showed off his slide guitar skills with the Elmore James song Dust My Broom.

His stage presence and ability impressed both Richards and Jagger as it had done Alexis Korner.

This initial meeting brought together people with a mutual interest in the blues. In England, blues recordings had quite often arrived as cheap packaging to protect records of more popular artists that were being distributed to American armed forces personnel in Europe. Radio recordings had been limited to occasional appearances by black American Blues artists on the BBC, throughout the late 1950s.

The trad jazz revival was at its peak and figures such as Kenny Ball, Acker Bilk and Chris Barber were topping the hit parade and discussing contracts for American tours. Keith Richards and Bill Wyman talked about how in 1962, rock n roll was dead in the water with the absence of the likes of Jerry Lee Lewis and Little Richard. Chuck Berry’s career was also at a low point as he fulfilled his jail sentence in the US. The singer, who was a major influence on the Rolling Stones, would gain greater British recognition for his landmark song, Johnny B Goode that had failed to chart when first released in 1958.  Meanwhile, Elvis was concentrating on filmmaking, as was his British equivalent Cliff Richard.

Pop figures topping the charts were viewed by many as being very commercial. London youth of 1962 were looking for a new sound, just like the teenagers of Liverpool, from where Merseybeat would begin to stir at the end of 1963.

The Rolling Stones in Ealing

Keith Richards would write letters about his favourite rhythm and blues club in Ealing and since 2012 has boosted the story of the club with a second blue plaque.

In Spring 1962, Brian Jones was to find pianist Ian Stewart. Eventually, Alexis Korner would offer a bunch of musicians consisting of Mick, Keith, Brian and Ian the chance to perform at the Marquee Jazz Club,  that had opened its doors to British rhythm and blues thanks to Blues Inc’s ongoing success at Ealing.

12 July 1962, would be the “Rollin” Stones first official gig, at the Marquee Club. Regular Saturday slots at Ealing would then be taken by the band and 22 Rolling Stones gigs would follow. 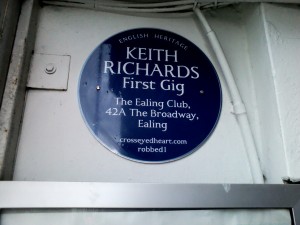 British Rhythm and Blues 1962
The combination of electric guitars and pounding drums, all playing music whose primary inspiration and source were black American blues records, is what British rhythm and blues was all about. Ealing became its first hub.

In 2012, six of the top 10 guitarists named in a Rolling Stone magazine article had links with the Ealing scene.

In April 2012 the passing of Jim Marshall the founder of Marshall Amplification (a company that started less than two miles away in Hanwell) was also world news. Many familiar with the brand might believe such a name had US origins when in fact West London is where that company began.

The success of the London ‘R &B’ scene helped highlight Black American blues guitarists such as Leadbelly and Muddy Waters who gained some of the recognition they deserved amongst mainstream American audiences. Their music has traveled to new continents beyond America.

In 1962 Ealing was full of live venues and the Town Hall was even a regular venue for major acts of the day such as Acker Bilk, Kenny Ball and Chris Barber.

The Ealing Music Scene in 2019

Since the original publication of this web page in 2012, numerous attempts have been made to make live music a sustainable proposition at the original Ealing Club venue. The Ealing Club CIC (a non-for profit social enterprise) has also been trying to stimulate and define the narrative of Ealing’s contribution to music via exhibitions and music events.

Following a visit to Ealing by Charlie Watts in March 2012, Ealing’s historical connections have been affirmed in a growing number of books, documentaries and film projects that mention the area’s past contributions. Late 2016 saw mentions of Ealing’s Rolling Stones connections: reviews of the Stones Album ‘Blue and Lonesome’, CBS ‘Sunday Morning’ and Robert Fricke at Rolling Stone Magazine were notable examples.

Campaigns to highlight the club have no doubt centred some attention on the wider plight and the challenges facing established small live music venues across the UK. (See Ealing Club Blog)

In absence of a sustainable venue in Ealing,  The Ealing Club Community Interest Company has worked with numerous partners to raise awareness of Ealing’s music heritage while inspiring new opportunities for live music. Several events have been boosted or inspired by celebrating music heritage, most notably the The Ealing Blues Festival, Hanwell Hootie, EMFF, SoundBite Festival and Ealing Eclectic.

Since 2013, the Hanwell Hootie has become London’s largest free festival while headline acts at the Ealing Blues Festival included Mungo Jerry and the Blockheads. The Ealing Club CIC’s proprietary ‘Ealing Eclectic MusicSpace’ event continues to reach out to venues, musicians and audiences in an effort to push the case for premium live music events in the suburbs. In 2018, we saw gigs dedicated to visitors from Brazil, Argentina and Belgium and more besides.

Redevelopment plans for central Ealing have come and gone and will no doubt return. Visitor numbers to Ealing Club CIC events and our partners who provide live music are growing and there is a slow acceptance that music heritage should be celebrated as it is in “music cities” such as Liverpool, Nashville, Memphis…..Vienna.

In 2018, a feature film documentary, Suburban Steps To Rockland – The Story of The Ealing Club saw successful premieres at film festivals across Europe and we hope it will emerge on broadcasting platforms across the planet. Understanding the story of music in the London suburbs will do more to boost future music than any commemorative plaque.