This venue is surely one of the finest examples of a Victorian music hall, turned nightclub that occasionally becomes a live music venue…. Many years ago, Ealing had a similar ‘music hall’ but changing times saw it’s demise in the 1950’s. (Ealing Music Past)

The Selector @ Clapham Grand – proving that classic gigs can be affordable

Support band …….The Tuts
The gig kicked off with a spot from an emerging trio from Hayes……. ‘The Tuts’ who made a point of stating their origins from their hometown (just down the road from Ealing).

The band went on to liven up the almost empty dance-floor by jumping off stage and playing amongst the crowd…..their upbeat guitar punk performance deserves a stage way back out west. However, they are probably way beyond any West London budget, having already played Glastonbury.

As the venue filled up for the main act, Ska Dj and Bodysnatchers legend Rhoda Dakar took to the stage spinning classic tunes. The infectious bass-lines started to reverberate and resonate throughout the body of the crowd.

The Liquidator (Harry J All Stars) was inevitably popular with all the Chelsea FC fans, well accustomed to paying way more than just the £20.00 fee charged for this evening’s gig.

A £20.00 ticket fee, is relatively affordable to many thousands of London visitors who would relish the experience of seeing such a legendary band

However, most London visitors will remain oblivious to the existence of such events and will only get to hear about the most oversubscribed music offerings that London has on offer.

It’s no wonder, Noel Gallagher appears on TV complaining about the secondary ticket market while established, smaller live music venues across the UK fight for their day-to-day existence……. Let alone considering setting up in business…..

Let’s hope in 2016, cross party consensus from politicians and music industry decision makers continues to develop all the great work undertaken in 2015. (See Ealing On The London Map) 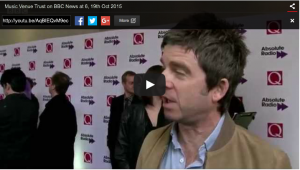 These two graced the frontline of the band with the energy they had when they kicked off back in 1979.

Classics such as 3 Minute Hero, Missing, Pressure combined with novel and topical SKA themed anthems such as James Bond, a track that can be heard on their latest album ‘Subculture’

This line up have still got it and they look set to please, many a festival audience over the next few years.

The Ska Legacy
The Selecter are one of the key contributors to the music that hailed from Coventry’s two tone label, a movement that pushed so much of this music to a UK audience and one step beyond….

Some TV producers have recently been asking why so few Black British Blues Singers emerged from the UK in the early 60’s.

It’s an interesting line of enquiry as leading Black vocalists performing within the British ‘R & B’ scene were all ex-American GI soldiers … e.g: Ronnie Jones (Blues Incorporated) and Geno Washington…. Many would agree these particular performers also added some “Soul” music into the mix.

The Blues & Ska:
The simple explanation might be that most Black immigrants to London in the 50’s & 60’s emigrated from the Caribbean Islands and like most white audiences of the time may have heard very little of the blues of Muddy Waters etc………

One thing is for sure, those Caribbean Islands moved to a different beat to that of Chicago & New Orleans…as did Havana & Buenos Aires…….All those beats continue to echo down the years and really come into their own when watching music live.

In 2016 ……..Go see some LIVE MUSIC……in a small venue……You’ll find details on some of the most exciting LIVE MUSIC in West London here: https://www.ealingclub.com/event/.

Next gig is Ealing Eclectic on the 30th January 2016