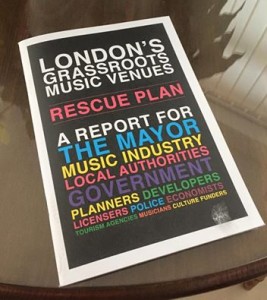 As a music city, London is now cited as the music capital of the world. However, it’s promotion of small live music venues to visitors is a key problem that needs to be resolved.  Challenges faced by small live music venues across the UK are immense: Noise issues, promotion, lack of investment, development, business rates are just some of the countless issues faced when setting up a venue.

Music Venues Day demonstrated that there is an emerging consensus developing amongst the key political parties to take action on all these points.

Maybe one day, this will all filter through to Ealing.  Let’s hope there is still an interest in Rock music by the time that happens. The full report can be accessed via the Music Venues Trust website: www.musicvenuetrust.com or downloaded directly from London City Hall.

It’s great to see Ealing mentioned in the same breath as the 2I’s coffee shop and The Marquee. Two iconic names that were key to British Music.

Many believe, that WEST LONDON should be up there with LIVERPOOL.